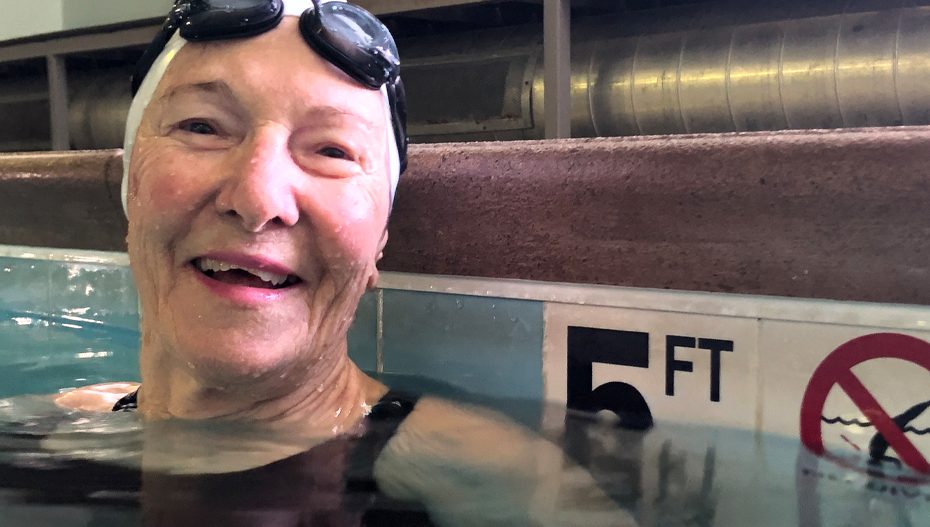 Swimming is a powerful daily motivator for Charlotte Sanddal, who recently set her 10th national record for her age group at a national swim meet. For Victoria Dickinson, it’s a key to good health, not only hers but that of others whom she helps via hydrotherapy. And for Mike Tuss, it’s been part of the reason he can still go the distance after a challenging injury.

In her own good time: Charlotte Sanddal

If “slow and steady wins the race,” according to Aesop’s fables, then Sanddal is doubly victorious.

Nearly 50 years after taking up swimming, Sanddal competed in the recent Montana Masters State Championship meet in Bozeman. She swam 1,650 yards in just over an hour and earned her 10th national record for her age group.

“I’m not a fast swimmer, so I’m just glad that everyone has quit swimming at my age,” says Sanddal drily.

Although not particularly athletic growing up, Sanddal has always been active. The former Chicago native joined the Navy as an aviation machinist mate in 1942 and met her husband there. With few career options for women, she was nonetheless interested in social work.

That’s the career from which she retired in 1972, the year she took up swimming. She was one of many in the pool nearing 50 years of age and enjoyed both the social connection and how it made her feel physically, says Sanddal. So she kept at it, even competing in the Montana Senior Olympics.

Then she joined the Helena branch of the organization United States Masters Swimming, a national non-profit dedicated to promoting swimming to its membership.

According to the USMS director of publications and communications, Daniel Pauling, there are 1,526 localized swim groups across the country, including seven in Idaho and 11 in Montana. And of their roughly 60,000 members, nearly half are 50 or older, says Pauling.

Sanddal, who swims with the Helena Ridley Masters group, has made staying mentally and physically fit a priority.

“On a daily basis I do think about what I can do to keep in good physical condition,” says Sanddal, who still kayaks and plays bridge, although she’s given up snowshoeing and hiking. Her ’90 SUV has 222,000 miles on it.

Although she enjoys the occasional glass of wine, proper diet is important, too. She follows the advice of fellow Helena swimmer and USMS coach Peggy Stringer: “Don’t put anything on the table that has flour or sugar in the first three ingredients.”

“There isn’t anyone that doesn’t wish me well, and we do that for all our team members,” says Sanddal, who notes that even the youngest swimmers offer high-fives to other swimmers, regardless of age or ability.

As a social worker, Sanddal knows the importance of that kind of community and she often speaks of wanting to make a good showing for her Masters group.

With an eye toward the future—she and her daughter are discussing possible trips to Rio and Japan—Sanddal is characteristically pragmatic about continuing swimming.

“It gets me up in the morning.”

The picture of health: Victoria Dickinson

Victoria Dickinson has spent much of her life in the water, and it shows. Seventy years after she first learned to swim, Dickinson practices with a Coeur d’Alene, Idaho-based USMS group several times a week and occasionally swims in the open water. She has also long been a practitioner of hydrotherapy.

“When you’re in the water, you’re decompressing those joints, lubricating them without stress,” says Dickinson, who is the same height at 74 as she was as a young adult (and could easily pass for early 60s).

Chalk some of that up to genetics. Her father, a diver and Princeton University swimmer taught her to swim in Cape Cod, Mass. when she was 4. By age 11, when her family moved to Texas, she was nabbing wins through her state’s Amateur Athletic Union.

While attending University of New Mexico, Dickinson joined the swim team—she admits with a grin that she only did so to see her then-boyfriend, a fellow swimmer—and pursued a degree in health and physical education.

“I wanted to be a recreation director on a cruise ship,” says Dickinson, who went on to coach swimming and pursue her master’s at UNM.

Although she competed in her first USMS event at age 26, Dickinson’s relationship with swimming was still fairly casual. When she relocated as a young wife and mother to north Idaho in 1979, she worked out on her own, swimming in one of the Silver Valley’s several community pools built by the mining industry. She didn’t compete.

Instead, she started a youth swim team and convinced a physical therapist friend to let her work with patients in the pool.

“The things you can do in water make you stronger,” says Dickinson who recalls an 88-year-old woman who was not ambulatory and had to use a chair lift. After a month of thrice-weekly sessions, she regained the strength to lift herself up.

“My motto is it’s never too late to recover your strength,” says Dickinson, who works with clients in the pool at her home and still loves the way swimming makes her feel.

“When you’re floating in the water, you can’t tell where ‘you’ end and the universe starts.”

Mike Tuss started swimming 20 years ago to prepare for a triathlon. His first time at the YMCA pool schooled him.

Although a good runner growing up, when Tuss moved from Billings to Salt Lake in the ‘70s, he wasn’t really into sports until he got turned onto skiing. Back in Montana to attend college in Bozeman, Tuss backpacked and stayed active as he pursued a career in architecture.

But as he discovered that first day in the pool, swimming was a whole different kind of activity.

“Out of all the sports [I’ve done],” says Tuss, “when you lay off on swimming, you notice it.”

Now, says the 61-year-old Tuss, he swims three to four times weekly, typically 2,500 yards a clip. Sometimes he’ll go 4,200 yards or 170 or so laps in the 25-yard college fitness center pool where he swims with the Billings USMS group.

Forty-two hundred yards is exactly the distance for a full Ironman competition, like the one in Coeur d’Alene, Idaho, which Tuss did twice while in his ‘40s.

“Before I had my back issues, I’d always hoped I could train and make it to [world championship competition] in Hawaii,” says Tuss, who had back surgery in his ‘50s. He still bikes year-round, even in the winter.

Those gray Montana days can make it hard to muster the enthusiasm to get in the pool, says Tuss, who stays motivated because he knows how beneficial swimming is.

“I have more upper body strength than I’ve ever had in my life,” he says, and he appreciates even more how strong it keeps his core and his back.

Should he ever doubt the power of swimming, he doesn’t have to look far for inspiration, including fellow Montana swimmer, Sanddal.